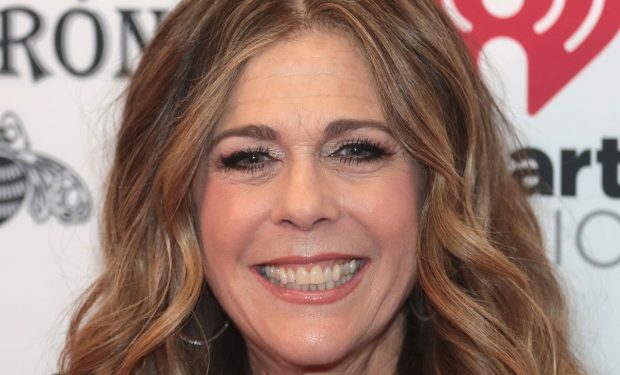 Two-time Oscar-winning actor Tom Hanks (Philadelphia, Forrest Gump) is nominated for another Oscar but this time for a Supportive Role as Mr. Fred Rogers in the film A Beautiful Day in the Neighborhood. (His last nomination, for Best Actor, was in 2001 for Cast Away.)

By his side at the Oscars will be his wife of 31 years, actress/singer Rita Wilson. They married in 1988, the same year Big and Punchline were released.

Wilson still acts too — she last played Marnie’s (Allison Williams) mom Evie on the HBO hit Girls, and it looks like, based on the photo below, she’s still singing!

For the Ladies of the 80s tribute (that’s why she’s dressed in fishnets and neon like Madonna in Desperately Seeking Susan), Wilson got to perform Juice Newton’s song “Angel of the Morning” and with Sheryl Crow singing backup! Wilson reports: “When Brandi showed up at rehearsal and sang harmonies I maybe passed out.”

In the video above, that’s Wilson (in the white undershirt and striped skirt) jumping up and down and singing back-up for Crow while she’s singing her hit song “Soak Up the Sun.”