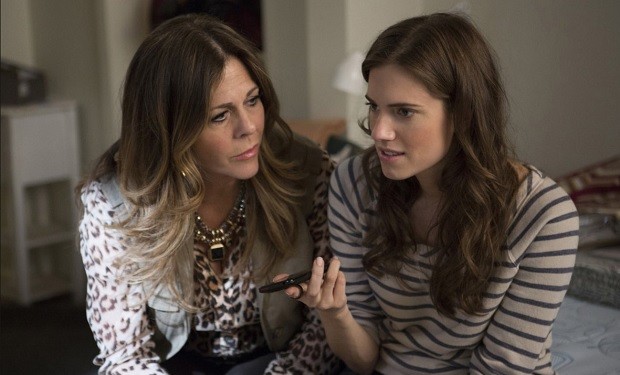 On the Season 5 premiere of Girls, Marnie (Allison Williams) is getting married at an upstate New York resort. The weather doesn’t look good, nor does her “unhinged” makeup artist. And then there’s the mother of the bride — Evie Michaels — to deal with.

[Rita Wilson is releasing her self-titled album on March 11

Evie Michaels is portrayed by Rita Wilson. She’s best known for her roles in the films Sleepless In Seattle, Runaway Bride, and It’s Complicated, among others. More recently, Wilson has been appearing on The Good Wife as lawyer Viola Walsh, representing tech company Chum Hum. You can see her next on the big screen in My Big Fat Greek Wedding 2 (Anna). Rita Wilson (born Margarita Ibrahimoff) is half Greek (her mother was born and raised in Greece). P.S. Wilson is married to Tom Hanks (they met on the set of Bosom Budddies in 1981), and she’s the mother of Colin Hanks (Life In Pieces). Girls airs Sundays at 10pm on HBO.