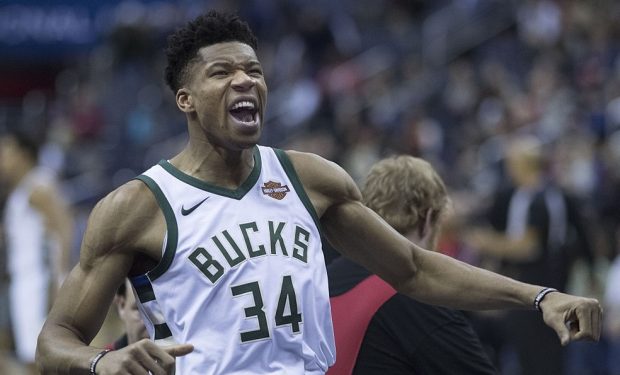 NBA superstar Giannis Antetokounmpo can do anything he sets his mind to. That notion, usually a cliche but true in the case of the so-called Greek Freak, has been imprinted all over the NBA.

Last year, Giannis raised his game to such an elite level that NBA voters had to neglect James Harden‘s boffo year and give Giannis the NBA MVP Award. This year his Milwaukee Bucks are the cream of the Eastern Conference crop. And Giannis is feeling it! He not only hoops like a freak, he gets freaky with some dance moves too!

When Giannis does his Greek Freak dance thing the announcers are clearly in love with the big fella. “Oh you gotta love it. We saw the birthday dance against the Clippers,” the announcer says, delighted. “[And now] the robot, oh man!”

When the 7-foot-tall Giannis goes up on one hand, the announcer has no words! “I mean…”