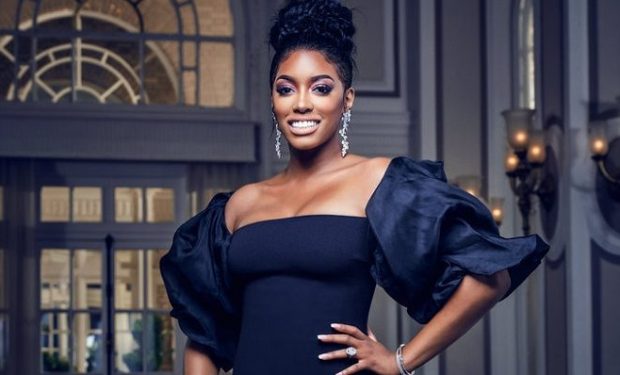 On The Real Housewives of Atlanta episode “Cheatin’ Heart,” while Kenya Moore unleashes her unfiltered thoughts on Cynthia Bailey, Porsha Williams struggles to make sense of her relationship with her fiance Dennis McKinley and according to Bravo “drops a bomb that no one is expecting.”

Porsha knows how to drop bombs. One day before this episode airs, she dropped a couple of photos with former Real Housewives of Atlanta star Kim Zolciak-Biermann. They bumped into each other at the Atlanta Women’s Expo and made sure to document the reunion.

The photos are strange because Porsha is in a wheelchair (she had foot surgery and is wearing just one thigh-high snakeskin print boot) and Kim is bending down at the waist.

More than one fan left comments about Kim’s super plump lips, e.g., “Those lips bout to explode.” (Both ladies are giving full pout!) Another suspects that Kim is pregnant with her seventh child, even though her husband, former NFL player Kroy Biermann, reportedly had a vasectomy. There is really no reason to suspect she’s pregnant, but fans want what fans want!

“She hiding the hell out of that stomach” one wrote. “Kim tryna hide that belly,” another wrote. “Kim is definitely preggo,” wrote another. Although she does not look pregnant in the bikini pic above which she shared just a few weeks ago!

The Real Housewives of Atlanta airs Sundays at 8 pm on Bravo. [BONUS: Stream any BRAVO show through the BRAVO Digital App found here. Download is FREE.]