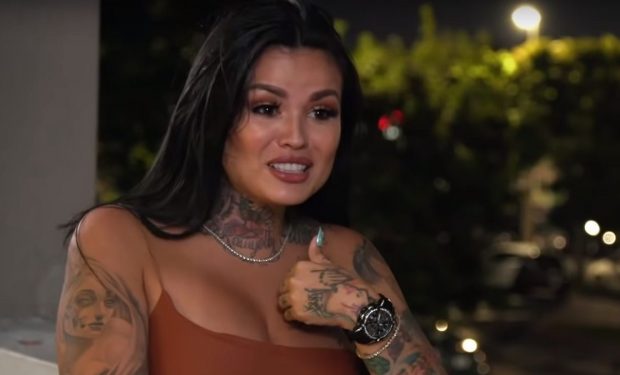 On the first season of the reality TV show Cartel Crew, America met the offspring of several convicted drug dealers including Michael Blanco, son of the infamous Griselda Blanco, who was depicted in the 2018 movie Cocaine Godmother by Catherine Zeta-Jones. The cameras also follow Katherine “Tatu Baby” Flores, daughter of a former drug kingpin in Queens, New York, who now owns the tattoo shop Till the End in Miami.

When not filming Cartel Crew, (the Season 2 premiere airs Thursday, October 7), Kat is enjoying her time off, traveling the world in a number of barely-there string bikinis.

In the bikini pic below, her dark wet bikini clings to her skin so closely it looks like a tattoo!

VH1 is airing a 30-minute special with highlights from Season 1 of Cartel Crew on Monday, September 30 at 10 pm. [NOTE: Stream VH1 shows from Amazon anytime — app is free]