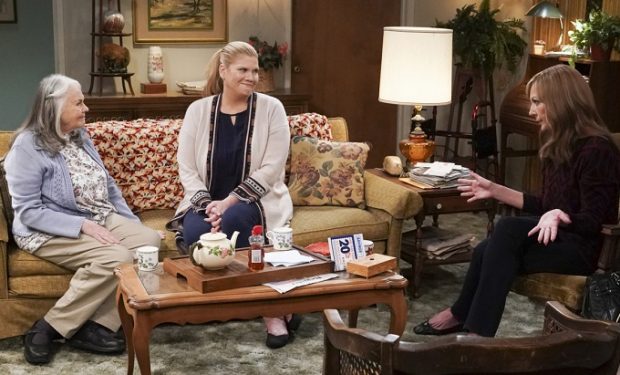 On the Mom episode “Triple Dip and an Overhand Grip,” while Christy (Anna Faris) and Jill (Jaime Pressly) accept a double date with two guys from their AA meeting, Bonnie (Allison Janney) and Tammy (Kristen Johnston) go on a road trip. Together they take a walk down memory lane when they visit their old foster mother Claire.

[…or in East of Eden with James Dean]

Claire on Mom is portrayed by Lois Smith. The 88-year-old actress is known for her roles in a variety of films including Lady Bird (Sister Sarah Joan, see link above), Minority Report (Dr. Iris Hineman), Twister (Meg Greene), and Elia Kazan’s East of Eden with James Dean, among many others.

Smith is also recognized for her TV roles on True Blood (Adele Stackhouse), One Life to Live (Aunt Betsy Cramer), and in the long-running 70s series The Doctors (Eleanor Conrad). Mom airs Thursdays at 9 pm on CBS, right after Young Sheldon.