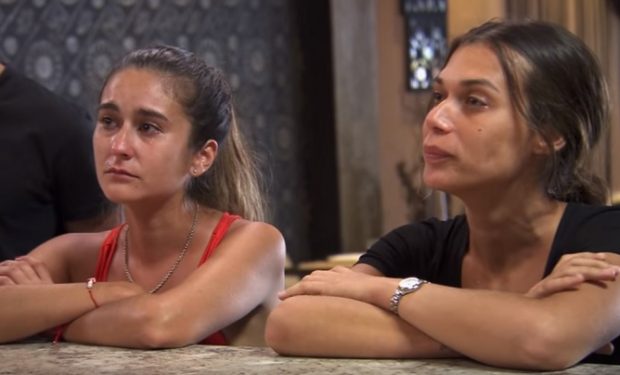 Maria and Gabriella of Shibo on Bar Rescue (Paramount Network)

On the Season 6 Bar Rescue episode “The Lights Come Back in Puerto Rico,” Jon Taffer returns to Puerto Rico. In San Juan, he meets brother and sister Jonathan and Gabriella Cruz, a duo who find themselves in over their heads after their bar Shibo was damaged by the catastrophic Hurricane Maria in September 2017. Gabriella and her husband invested in Jonathan as a chef (known for his Asian/Latin fusion sushi) and opened Shibo just months before the Hurricane hit. (This episode was filmed in April 2018: Shibo had been closed for seven months.)

[Taffer accuses Jonathan and Gabriella of making up excuses too]

Taffer was told that damage was terrible but when he arrives, he’s surprised. “There’s no water line there’s no damage at all!” he yells. Taffer says all the place needs is a good cleaning. “I could clean this place myself in a week.” Taffer accuses them of “giving up before you started.” He adds, “I understand there was a storm but you’ve got to fight to get out of it. And you didn’t.” Gabriella, and Jonathan’s girlfriend Maria (who is Shibo’s manager) say they had to inventory to re-open and no money. Taffer really loses it when he walks into the kitchen which is full of brand new equipment that still works. He doesn’t understand why they didn’t try to clean the place up and re-open.

[Watch any Bar Rescue episode whenever you want]

After Taffer settles down, he has a heart-to-heart with the owners and gives them a chance to make this right. “This is our chance to turn Maria into, dare I say some kind of blessing — that can make our lives better in the end. That’s all we can hope for, right?” Manager Maria says, “Meeting Jon was a little bit emotional. Speaking about our experiences and what we’ve been through it’s kinda hard to talk about but he knows. I think he gets us.” New episodes of Bar Rescue air Sundays at 10 pm on Paramount Network.