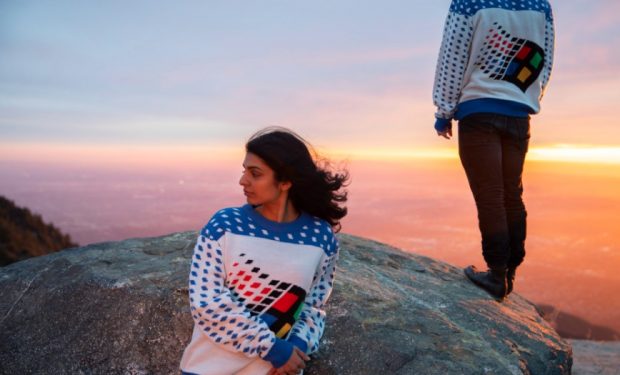 Nostalgia seekers are going crazy for what Microsoft calls its “ugly sweater” — a sartorial representation of Windows 95, then new and now iconic START button and all. Maybe it’s just that Windows users are stunned by the design — this is the only Windows product in history that doesn’t need patches! (Remarkably, you can still download 55MB of patches for Windows 95 here, if you still want them.)

Introducing the latest #Windows95 custom “softwear.”😉 Wish you could rock the #WindowsUglySweater? 👀 your DMs, because we’re giving a few lucky fans one of their very own. pic.twitter.com/84kQLtYsF2

At the Windows Twitter account, they ask: “Wish you could rock the #WindowsUglySweater?” And very clearly the answer is yes! Perhaps it’s just the marvelous moodiness of the sunset-strewn photo shoot and the pensive poses of the models — are they worried that their data are insecure? Or that their PCs will crash? Anyway, @Windows said it was giving a few of these vintage beauties away to the lucky DMers, but so far you can’t buy one anywhere. Etsy people?

I can’t believe you’re calling this beaut an “ugly sweater.” Its perfect in my eyes 😍😍😍 #WindowsUglySweater