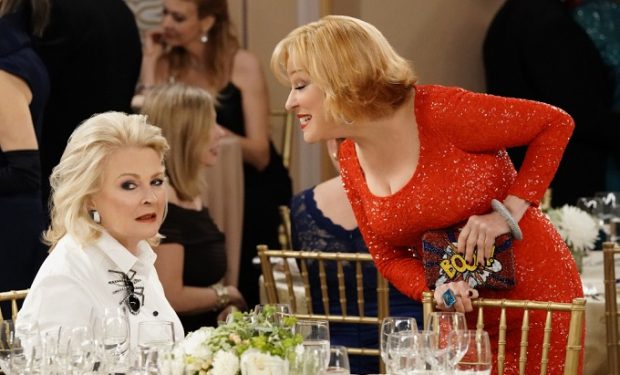 In the Murphy Brown episode “A Lifetime of Achievement”, Murphy (Candice Bergen) and the Mornings with Murphy gang celebrate the career of their fellow TV anchor Jim Dial (Charles Kimbrough), at a big event hosted by Katie Couric, who plays herself. But before the fete, Murphy is paid a visit by her “worst secretary of all time” — Caprice Caputowitz Feldman Morton. Caprice (Murphy’s 93rd secretary on the show) didn’t have any skills, was loud and on top of that ate the tops of all the muffins. Caprice appeared in the 1998 Murphy Brown episode “Never Can Say Goodbye: Part I”. Twenty years later and Caprice is flattered that Murphy remembers her so well.

[Check out Midler in The First Wives Club]

Caprice is portrayed by triple threat Bette Midler. The four-time Grammy Award winner and two-time Oscar nominee* is known for her roles in the films The First Wives Club (Brenda, SEE LINK ABOVE), Hocus Pocus (Winifred), Beaches (CC Bloom), Ruthless People (Barbara), Down and Out in Beverly Hills (Barbara), and The Rose (Mary Rose Foster), among others. Murphy Brown airs Thursdays at 9:30 pm on CBS, right after Mom and right before S.W.A.T.