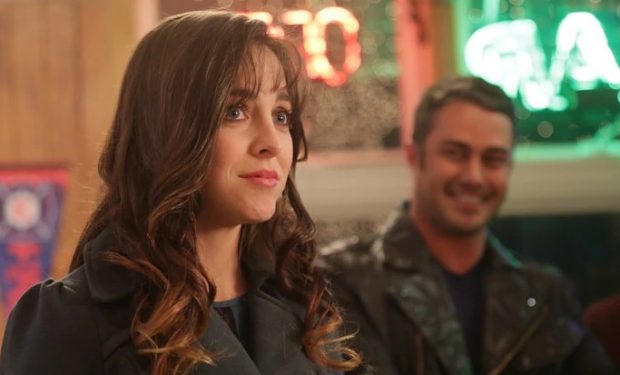 In the Chicago Fire episode “What Will Define You,” Kelly Severide (Taylor Kinney) prepares for his father Benny’s funeral (Treat Williams) with his mother Jennifer (Kim Delaney). While looking for his Bronze Star medal, Severide suggests that maybe one of his exes has it which makes Jennifer cringe. She’s not looking forward to seeing all his exes at the funeral. Kelly’s half-sister Katie Nolan will be there too. Last time we saw Katie was in the Season 2 episode “Virgin Skin” (see link below) when she was kidnapped and beaten by Vince Keller, an act of revenge for Severide. After Severide rescued her, the young chef left town.

Kelly’s half-sister on Chicago Fire Katie Nolan is portrayed by actress Brittany Curran. Curran is also known for her roles on The Magicians (Fen), Twisted (Phoebe Daly), Men of a Certain Age (Lucy), The Suite Life of Zack and Cody (Chelsea), and in the 2014 film Dear White People (Sofia Fletcher), among others. Chicago Fire airs Wednesdays at 8:30 pm on NBC, right after Chicago Med and right before Chicago P.D.

Just hanging out with Norman on this crisp Fall evening. 🔪🍁🎃 #ABoysBestFriendIsHisMother