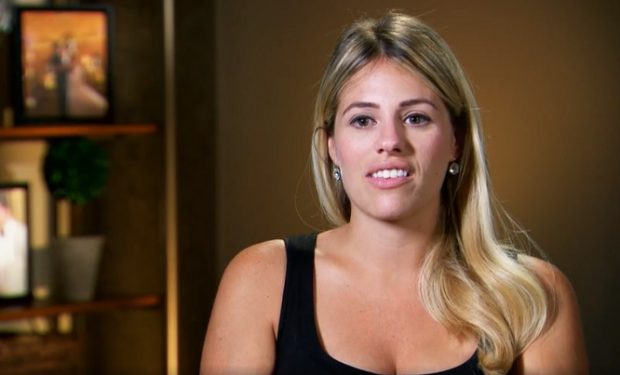 Ashley on Married at First Sight: Happily Ever After (Lifetime)

In the Married at First Sight: Happily Ever After episode “Lost in Transparency,” after a relaxing retreat, the couples get back to work on their relationships. While Shawniece and Jephte from Season 6 struggle with their marriage (they separated), Ashley’s main complaint is that her husband Anthony has a hard time taking things more seriously. When Ashley’s told by a marriage counselor “you’re never going to be the same person” and that Ashley should “respect the difference,” Ashley asks in disbelief, “So I have to be okay with that?”

[Binge watch Married at First Sight whenever you want]

Sure, being pregnant changes the dynamics of a marriage but Ashley should count her blessings. It’s not like Anthony is sleeping around with other women (Jephte!), he’s just having innocent fun. Having a sense of humor comes in handy when you have your first child! Married at First Sight: Happily Ever After airs Tuesdays at 10 pm on Lifetime, right after Married at First: Honeymoon Island. [Related: Married at First Sight: Ashley Opens Boutique Before Baby Comes]

✨ The much requested bump picture! ✨  We are super excited to meet this little @peanut in just a few short months! 🎀💕 Lately we have talked a lot about buying a house in the suburbs. We just feel like we need more space. But omg the amount of stuff that comes with having a baby can be a bit overwhelming! I’m kind of nervous about moving. I’m so used to having my sister and best friend right down the street, and I’ve been worried about how I’m going to meet other like-minded moms in the suburbs. Luckily, a friend told me to download @peanut – it’s an awesome social networking app for moms! @peanut is basically an app that allows you to connect with other moms in your area (or anywhere you want!). You can chat, schedule meet ups, ask questions and get advice from other women experiencing the same things! This app is already becoming one of my favorite apps! I hear it takes a village to raise kids and I know I will need all the support I can get. I’m already so grateful to have @peanut to help me connect with others! Tag another mom or mom-to-be who may need this today – we’re in this together! 📸 @itsanthonydamico #peanutapp #pregnacy #bump #expectingmom #ad #marriedatfirstsight #mafshappilyeverafter