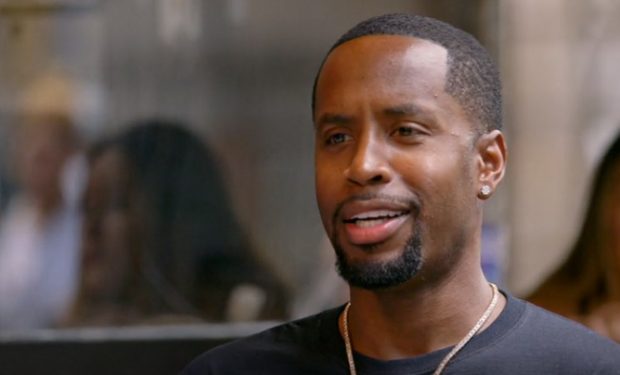 There are a lot of familiar faces on Season 9 of Love & Hip Hop New York. While Harlem rapper Juelz Santana and his longtime girlfriend Kimbella try to navigate their next steps after Juelz’s arrest at Newark airport, Safaree Samuels returns to New York after a sticky season on the West Coast. Earlier in the year, he joined the cast of Love & Hip Hop Hollywood where he was accused of sleeping with A1’s wife Lyrica. Sarafee looks happy to be back in the Big Apple. The Brooklyn native grabs a slice of pizza with Rich Dollaz and Joe Budden, who brings his adorable newborn baby Lexington with him. (Joe’s girlfriend Cyn Santana is the mother.)

[Safaree’s It Is What It Is album]

When Safaree holds Lexington on his lap and tells the baby, “You are going to help me find my wife,” daddy Joe Budden takes the baby back and says Safaree has enough women problems. Safaree goes on to say “I need one of these,” (a baby), “I really, really want to settle down.” Safaree, who is now 37 years old, declares: “This is where I am in life right now,” he insists. Joe Budden grills Safaree about Lyrica without naming her. “Did you have sex, did you kiss, did you dry hump, did you cuddle?”

Safaree says “absolutely not” to everything. It’s hard to believe that the whole West Coast story-line was a bunch of lies — but Safaree is sticking to it on Love & Hip Hop New York, which airs Mondays at 8 pm on VH1.