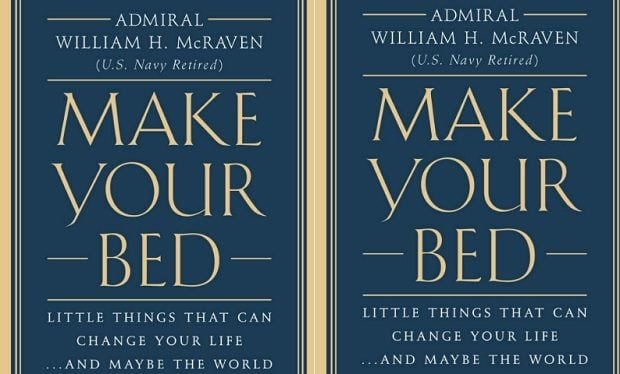 Admiral William H. McRaven gave a commencement address to the University of Texas at Austin in 2014 that struck people with the power that David Foster Wallace‘s famous commencement address at Kenyon College had in 2005. A speech is not quite a book, of course, but McRaven’s experience is long and deep, and he has taken the bones of his graduation advice and given it enough flesh to make 147 pages called Make Your Bed: Little Things That Can Change Your Life… And Maybe the World. Those 147 pages almost immediately hit #1 at Amazon.

[Make Your Bed: Little Things That Can Change Your Life… And Maybe the World]

McRaven, a four-star admiral, spent 37 years as a Navy SEAL. He is also a proud father of three — and his time as a parent has been as valuable to him in forming his ideas about life as his time as a SEAL Commander. Predictably, McRaven is task-oriented. The title comes from an easy way to take McRaven’s first bit of advice: “Start Your Day with a Task Completed.” (Make bed, voila!) But McRaven is not — and this is a welcome change from many popular advice tomes — merely a rugged individualist. He’s a team builder and team player: chapter two is called “You Cant’t Go It Alone.” The last chapter is called “Never, Ever Quit!” and in between McRaven both acknowledges that “life’s not fair” and encourages you to “dare greatly” in spite (or even because) of this fact. This is self-help for conservatives and liberals alike. Hey, chapter nine is called “Give People Hope.”