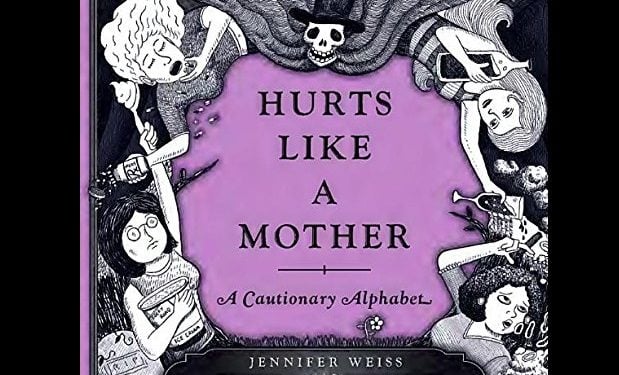 Hurts Like A Mother: A Cautionary Alphabet is making people laugh all over the country and getting sparkling reviews from places like People magazine (“morbidly funny”). 2paragraphs caught up with its busy authors, Jennifer Weiss and Lauren Franklin, and asked one question.

2paragraphs: Why is this book connecting so powerfully with people?

Jennifer Weiss & Lauren Franklin: There are two main elements that we think make the book resonate so much with readers. First, it has become au courant to use dark humor to capture and defuse the sometimes horrifying moments of parenting, and Hurts Like A Mother: A Cautionary Alphabet is devoted entirely to making mothers laugh (loudly and often) at the perils of parenting. In the book, we cover the gambit of parenting hazards–from faulty breast pumps that electrocute nursing mothers, to moms experiencing road rage on the endless college tour– so whatever stage or phase of parenting the reader is in, they will be able to relate. We take a slice of parenting and twist it to a ridiculous, larger-than-life place so mothers will laugh and not cry. But as absurdist as the book is at times–we don’t actually know anyone who has been asphyxiated blowing up pool toys!–you’d be surprised at how many  readers want to share their own personal anecdotes with us that mirror the book’s contents. (As one reader told us, “while you may not actually go blind searching for nits and head lice, after Day 4 of nit picking, you certainly feel like you might!”) In the vein of Go the F**K to Sleep, Hurts Like A Mother relies on levity to help mothers keep their sanity. Our book takes readers on an A-Z journey where Amy overdoes the Pinot at the Parent Potluck and Xena is humiliated by her mom jeans. But in the end it is Zoe who triumphantly retires, child-free, on the beach with cocktails and men fanning her with fronds.

Second, it’s a parody of the ever-popular classic The Gashlycrumb Tinies by Edward Gorey, and many of our readers grew up reading Gorey or became acquainted with his work as adults. We tried to imbue Hurts Like A Mother with a similar sensibility with macabre language and hilarious gothic black and white illustrations. Gorey’s book broke taboos as he told of 26 children meeting terrifying fates on an outing (C is for Clara who wasted away, D is for Desmond thrown out of a sleigh). In Hurts Like A Mother we also tried to break taboos by taking everyday parenting anecdotes to an extreme: Claire was iced out, her snacks weren’t organic, Coordinating carpools made Dee pop a Xanax. We think readers love being both shocked and entertained at the same time.