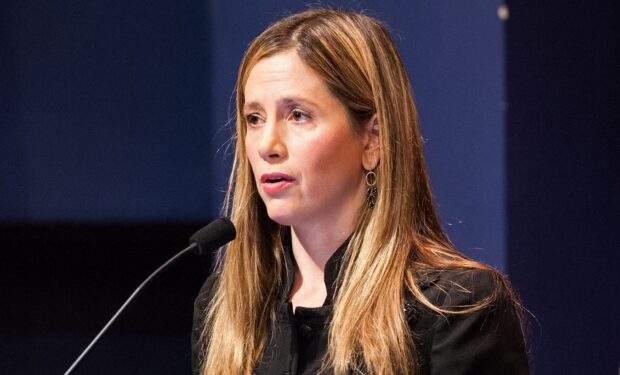 Oscar Award winner Mira Sorvino (Mighty Aphrodite, Romy and Michele’s High School Reunion) is filming the new TV comedy/horror series Shining Vale, which stars Courteney Cox (who also produces the show) and Greg Kinnear (As Good As It Gets). They play a married couple with kids who move from the city to a cursed house in a small town.” Judith Light (Transparent) and Sherilyn Fenn (Twin Peaks) also star. Mira plays the blond “bombshell” character Rosemary who Variety says is either the alter ego of Cox’s character or “a demon trying to possess her.” Haunting!

While Mira can’t reveal too much about her character or her costumes, she did share the stunning selfies below. As many of her fans pointed out: she looks “amazing” and appears like a blond “bombshell!”

When Mira posted the selfie above, she wrote: “Today I did something I had a lot of fear about. I had a bathtub scene in our amazing new show @shiningvalestarz and I haven’t done anything semi-clad in what seems like forever.” See sneak peek photos below.

Get ready to see more of Mira: she will play Monica Lewinsky’s mother Marcia Lewis in the Season 3 premiere of American Crime Story: Impeachment (September 7 on FX).