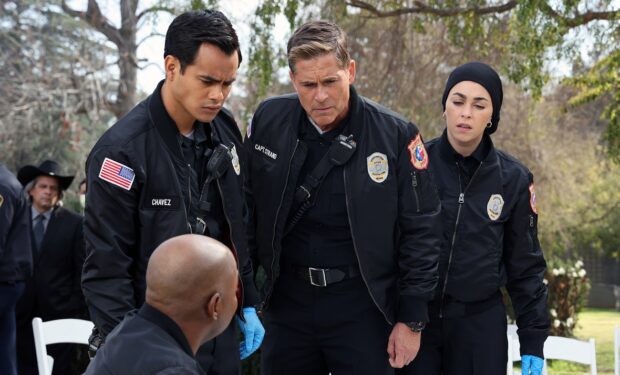 In the 9-1-1: Lone Star episode “Displaced,” while Owen (Rob Lowe) and T.K. (Ronen Rubinstein) feel displaced in their home as Gwyneth (Lisa Edelstein) settles in, the 126 arrive at a funeral “where another dead body shows up at the burial.” The scene is nothing but dramatic. The dead body falls from the sky (a passing plane) and lands right on top of the coffin about to be lowered into the ground at the ceremony.

An all-new #911LoneStar is flyin’ in on MONDAY! ✈️ pic.twitter.com/p3mF42HUZq

Things get even weirder when the team realizes that the dead body that crashed onto the coffin wasn’t alone on the plane. They find a pink fingernail which means someone was trying to hold on to the dead body before he left the plane.