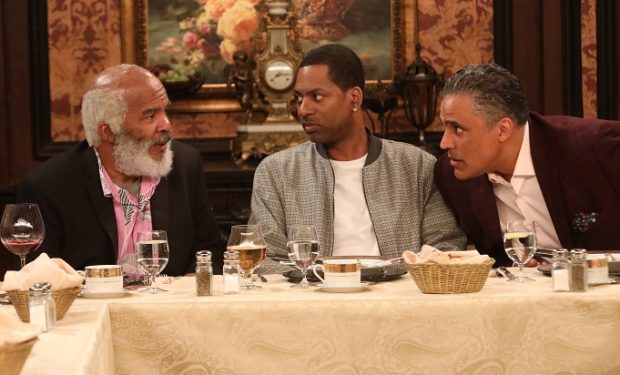 In The Cool Kids episode “Vegas Baby!” the gang travels to Las Vegas for the wedding of Hank’s (David Alan Grier) son Devon. Hank is excited to give Devon the perfect wedding gift but his spirit deflates when he finds out his ex-wife Lorraine’s (Jackee) gorgeous, younger boyfriend Reggie (NBA champion Rick Fox) is paying for everything.

Hank’s son is portrayed by Tony Rock. The younger brother of comedian Chris Rock (there are seven brothers and two sisters! — see family photo below) is a stand-up comedian, too. (Chris Rock is 54, Tony Rock is 44.) As an actor, Tony Rock is known for his roles on Living Biblically (Vince), Mann and Wife (Michael Hobbs), Everybody Hates Chris (Uncle Ryan, see link above), and All of Us (Dirk Black), among others. The Cool Kids airs Fridays at 8:30 pm on Fox, right after Last Man Standing.

The Rock Clan (still a few missing). Can you name everyone? #NationalSiblingsDay

The time of my life filming this show… #AllofUs #RocktheWorldForever