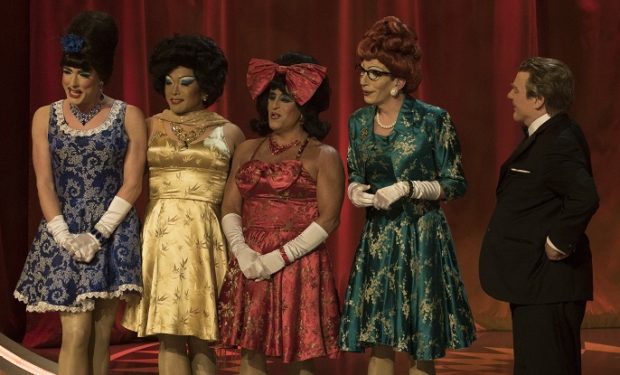 On Season 2 of The Gong Show, host Tommy Maitland (Mike Myers) welcomes three celebrity judges — former Saturday Night Live player Jason Sudeikis, reality TV star Sharon Osbourne and singer Brad Paisley — to the stage. Together they are treated to a performance by The Kinsey Sicks. The a cappella group describes itself as “America’s Favorite Dragapella Beautyshop Quartet.” Their name — Kinsey Sicks — refers to the sexual orientation scale designed by sexologist Alfred Kinsey. (Watch the award-winning movie about Kinsey’s wild, sex-filled life). A 6 on the Kinsey scale was defined as exclusively homosexual.

[Watch The Kinsey Sick’s movie I Wanna Be a Republican]

The Kinsey Sicks came about in 1993 after the singers watched an inspirational Bette Midler show in San Francisco. (Midler starred in Gypsy that year.) Over the years, The Kinsey Sicks have released nine studio albums including their latest Eight Is Enough (2016). The current members of The Kinsey Sicks — Winnie, Rachel, Trixie, Trampolina — are kicking off a 25th anniversary tour this summer. Check out “the guys behind the girls” of The Kinsey Sicks below. The Gong Show airs Thursdays at 8pm on ABC.

The Boys Behind the Girls! We had a blast performing for a special wedding on @hornblowercruises in the Bay today! And the ceremony was officiated by Winnie 1.0, Reb @irwinkeller! #SanFranciscoBelle #Dragapella