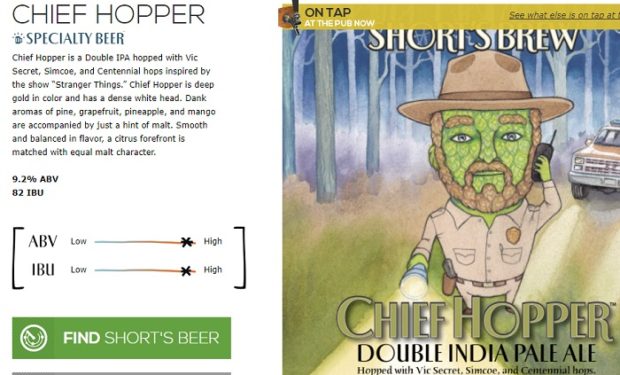 You don’t want to drink too much of Chief Hopper’s Double India Pale Ale — next thing you know things might feel all Upside Down. (It’s 9.2% ABV, so watch out!) But for the sensible imbiber, who maybe wants to dance a little (see video below), a Michigan craft brewer has created an IPA that has your — and Chief Hopper’s — name on it.

The spooky brew is golden and hoppy, like the Chief of the Hawkins, Indiana police. Short’s Brew in Bellaire, Michigan puts their art inside and outside its bottles (and cans) and the artistry on display on the labels is beautiful — every one of them. (The Chief Hopper IPA is just one example.) It’s the kind of place anybody might appreciate: on November 6, for instance, the pub is closed for “Employee Appreciation.” Shorts describes the brew, which is on tap now, this way: “Chief Hopper is a Double IPA hopped with Vic Secret, Simcoe, and Centennial hops inspired by the show “Stranger Things.” Chief Hopper is deep gold in color and has a dense white head. Dank aromas of pine, grapefruit, pineapple, and mango are accompanied by just a hint of malt. Smooth and balanced in flavor, a citrus forefront is matched with equal malt character.”