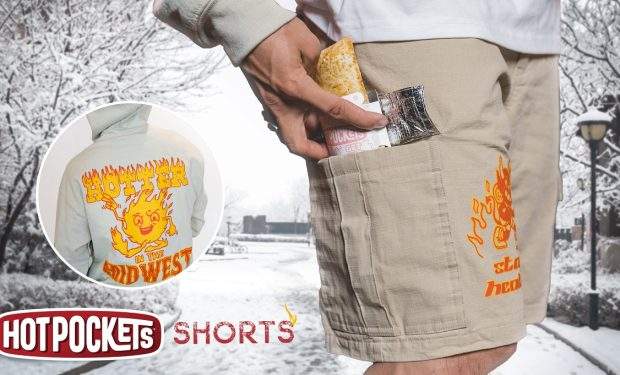 There are no stupid questions, goes the old saying, only stupid answers. That truism might reasonably come to mind — and into question — as you consider someone saying: “Darn, I just microwaved this delicious frozen Chicken, Broccoli & Cheddar with Crispy Buttery Seasoned Crust Hot Pocket — but I don’t want to eat it right now, where can I put it?”

The Hot Pockets team at Nestle was evidently eavesdropping on the perplexed person confronting this everyday dining dilemma. The team considered this pain point and sprung into action. They came up with an answer. Because the denim solution below is just not good enough.

“Eureka!” said the Hot Pockets creative staff, “We will insulate your pocket! That way you can put your Hot Pocket into your pants pocket and voila, as the say.” This is, admittedly, speculation. But something like this response occurred — we know because the team created a solution.

But how to bring the dream to life?

We will need people to help us with this radical apparel innovation is what came next to the minds of the Hot Pocket creatives. (Hot Pockets has developed more than 50 flavors, so it’s safe to say these creatives won’t be denied.) It was at this point that someone must have suggested the highly regarded fashion collective, The Columbus Fashion Alliance of Columbus, Ohio. The CFA can will help us! went the cry.

And the CFA said A-OK.

[Did you know that Columbus is a fashion hot bed? And that a survey a decade ago showed that Columbus was home to the third highest number of fashion designers among all American cities — after New York and Los Angeles?]

Cargo shorts, somewhat predictably, became the real world result of this funky collaboration between the innovative Columbus Fashion Alliance and tireless creatives at Hot Pockets — cargo shorts that feature a heated pocket for Hot Pocket-size cargo. Wonders, as they say, never cease. You can order your pair here. They will be ready on December 12, just in time for the holidays.