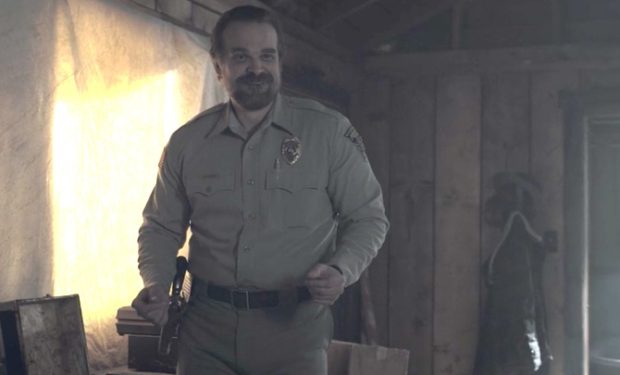 Sheriff Jim Hopper getting down to "Come On Eileen"

Admit it, you’ve danced a little to “Come On Eileen” by Dexy’s Midnight Runners yourself. Even if you couldn’t have named the band to save your soul, you’ve still jigged a bit somewhere in time when that infectious beat hit your feet. Well, rest assured it happens to everybody. Take Sheriff Jim Hopper of Stranger Things, who has his own “Come On Eileen” moment thanks to the imaginative HopperDancingTo Twitter account. Fiddles anyone? Only thing that could make it better is maybe Hopper sporting the painter’s overalls from the original MTV smash hit video.

The list of songs Hopper dances to at the HopperDancing should be compiled into a greatest hits record — for later use by sociologists exploring the 21st century fragmentation of society. It’s very unlikely any one person is familiar with each song, though they’re all popular. (From the Counting Crows to The Office Theme Song — which btw sounds like a close cousin of “Come On Eileen” — give a listen.) Bustle writes of Hopper latest Dexy’s dance meme: “at least ease those jitters you’ve been laboring with ever since the particularly terrifying, penultimate episode ‘Chapter Eight: The Mind Flayer.'” Well that’s a lot to ask, but there are a lot of dances. Stranger Things is on Netflix.