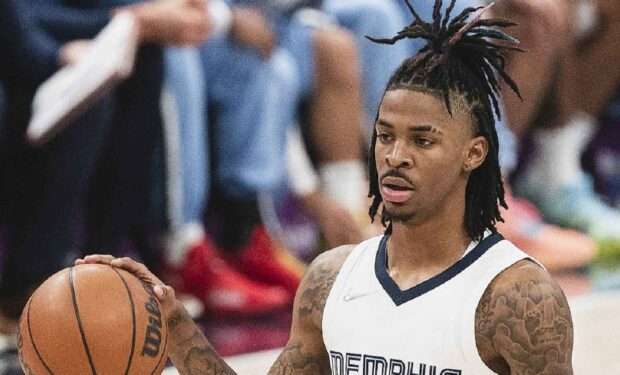 Shaquille O’Neal has been appealing to the powers that be to pay more attention to Ja Morant in the NBA MVP race. O’Neal always likes an underdog, and he feels Morant has been overlooked, despite the dynamic guard’s stellar play and the Memphis Grizzlies 31-15 record, putting them near the top of the Western Conference.

But in pleading his case for Morant in his good-hearted way, Shaq went a little overboard about just how unrecognized Morant has been. Shaq said of Morant:

“When you talk about how hard work pays off…[Morant] wasn’t no high draft pick, wasn’t really talked about in high school, but the kid can flat out play.”

It’s true that nobody from Kansas, Kentucky, Duke or North Carolina knocked on young high school Ja Morant’s door. He caught a scout’s eye playing three-on-three and got a scholarship to Murray State instead.

Murray State is likely only familiar to you from your NCAA brackets, where the “mid-major” seems like a perennial 12 seed coming out of the Ohio Valley Conference. (They are now in the Missouri Valley Conference.)

But — and it’s a big but — the basketball world didn’t just recently find out about Morant. Shaq really fails his history lesson here.

Because when Shaq says Morant “wasn’t no high draft pick”… well, there was only one player (Zion Williamson) drafted higher. After college, where he was a consensus first team All-American in 2019, Ja Morant was the #2 pick in the 2019 NBA draft.

Admittedly he hasn’t yet been named NBA MVP, but Morant hasn’t exactly been an unknown quantity in a long while. Shaq should keep giving Morant his Shaq-olades, but for this history fail, Shaq himself is ready for Shaqtin’ a Fool.