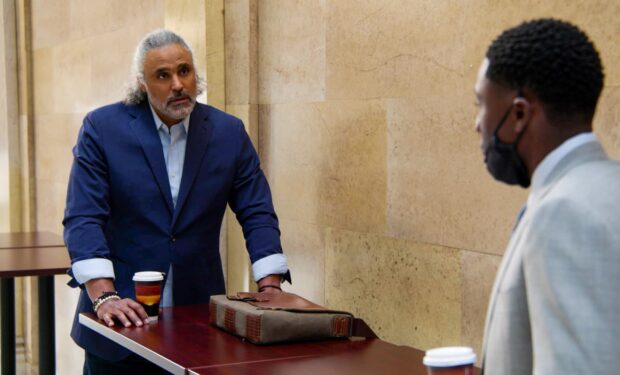 In the All Rise episode ‘Bounceback,’ while Judge Lola Carmichael (Simone Missick) awaits the birth of her baby, she learns the jury was going to deliver a “not guilty” verdict in a case in which she pressured defendant Leon Parsons (Isaiah Johnson) to take a plea deal. Meanwhile, August Fox introduces Luke (J. Alex Brinson) to the idea of restorative justice. August Fox is portrayed by retired NBA basketball player Rick Fox.

Rick Fox played college basketball at the University of North Carolina before he was selected by the Boston Celtics in the first round of the 1991 NBA Draft.

Since retiring from the NBA in 2004, the 6’7” small forward has been pursuing his acting career and spending time with his family including his 20-year-old daughter Sasha, whose mother is Fox’s ex-wife, actress/singer and former Miss America Vanessa Williams.

All Rise airs Mondays at 9 pm on CBS, right before Bull at 10 pm.