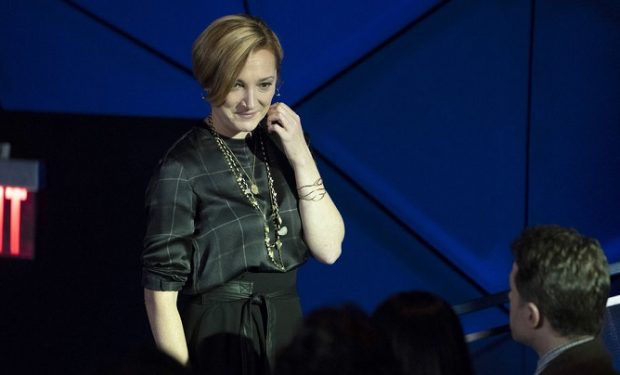 In the Manifest episode “S.N.A.F.U.”, the detained passengers are secretly moved and subjected to painful experimentation, with young Cal’s (Jack Messina) health directly linked to them. His father Ben Stone (Josh Dallas) is not about to give up. During his desperate search to find out where everyone has been taken, he discovers a British woman named Fiona Clarke whom he believes is working with whoever took the passengers and might be responsible for what happened on the plane. Ben goes to one of her self-help seminars. Fiona recognizes Ben in the audience. She approaches him and says, “Finally, I’ve been waiting for you.”

[Check out Faridany in Black Panther]

Fiona Clarke is portrayed by actress Francesca Faridany. The British-American actress is known for her roles on Homeland (Olivia), Law & Order True Crime (Lyle Mendenez’s friend Norma Novelli who recorded their conversations for three years), Falling Water (Helena Swift), ER (Carol Shoup-Sanders), and in the 2018 blockbuster film Black Panther (SEE LINK ABOVE) as museum director Thomas, and the 2017 film Love After Love with Andie McDowell. Fun fact: The classical stage actress (see her in Angels in America below) made her TV debut on the daytime soap opera Guiding Light in 1999. Manifest airs Mondays at 10 pm on NBC.