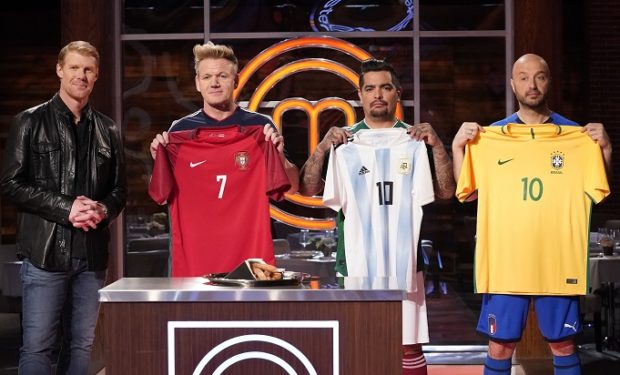 On the Season 9 episode of MasterChef, “World Cup Dishes,” the contestants must create a dish using walnuts and then welcome retired American soccer star Alexi Lalas to the kitchen. The 6’3” defender played on the U.S. men’s national soccer team in the 1994 FIFA World Cup. The U.S. didn’t make it to the World Cup this year, but Lalas is covering the 2018 World Cup on Fox Sports as an analyst.

In the MLS, Lalas played with the New England Revoluton, MetroStars, Kansas City Wizards, and the Los Angeles Galaxy. He had 16 career goals in the MLS. After retiring, he served as GM for the San Jose Earthquakes, New York Red Bulls, and LA Galaxy, during which time (2006-2008) the club signed David Beckham, Gordon Ramsay’s close friend. In 2006, Lalas was inducted into the National Soccer Hall of Fame.

In addition to loving the beautiful sport of soccer, Lalas also sings. In college, (Rutgers University), Lalas was in the rock band The Gypsies which was the opening act for Hootie & The Blowfish in Europe (1998). Since then, Lalas has released four solo albums. His latest is called Sunshine (see link above). MasterChef airs Wednesdays at 8pm on FOX.