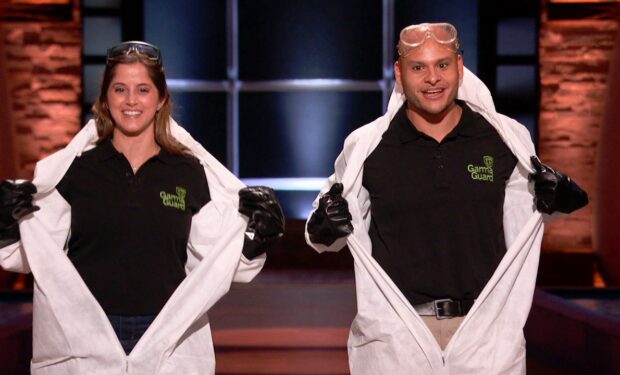 Bianca and Pete Badawy of GarmaGuard on SHARK TANK (ABC)

Husband and wife entrepreneurial team Pete Badawy and Bianca Badawy have created the first natural garment and fabric cleanser of its kind GarmaGuard. They claim the bottled spray product botanically eliminates odor and repels dirt, grime and bacteria on clothing.

While wearing matching white hazmat suits, the Badawys (he’s a US Army Veteran Police Officer; she’s a nurse) pitch their timely business on the Season 12 premiere of Shark Tank, which was filmed during the pandemic.

The Sharks — Mark Cuban, Kevin O’Leary, Lori Greiner, Daymond John and guest Shark, TOMS Shoes founder Blake Mycoskie — sit six feet apart from each other and more than that from the entrepreneurs during the presentations.

In the Tank, the Badawys seek an investment of $100,000 in exchange for 10 percent equity of GarmaGuard. They have the good fortune or bad luck of pitching in front of Lori Greiner who has invested in at least two odor elimination products on Shark Tank.