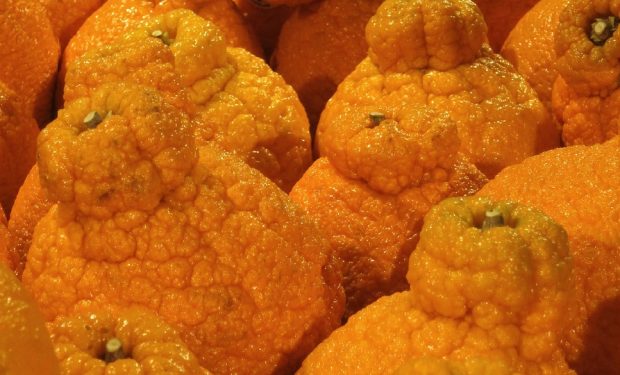 Trending. It used to be something that happened in America after, say, John F. Kennedy decided not to wear a hat (everybody stopped wearing hats) or when his wife Jackie Kennedy did anything. Jackie’s anything was trending. But these days the Internet says what’s trending with data to prove it — and no matter how many people (er, influencers) try to influence it, sometimes things just trend of their own accord.

Like the trending egg, which inexplicably was the most liked photo on Instagram — but you knew that already, because it trended. (That’s not to say a Beyonce or Kardashian or Drake can’t get things trending in the cultural flow, just that it’s not a given.)

Anyway what’s trending right now is “Sumo Orange Fruit” according to Pinterest, where the trending tends to happen based on flavor and functionality as much as celebrity shout-outs. Yup interest in the Sumo orange fruit has risen +365% as spring hits, and those irresistible summer fruit-based recipes start to sound not so far-fetched. Both Delish and Thrillist have tried to ride (and stoke) the trend, publishing articles in the past month about the Sumo Orange Fruit, also known as Japanese mandarins and Dekopons.

The Sumo Orange Fruit, a cross between the sweet Satsuma Mandarins and the citrus you commonly think of as a regular size orange, deserves the praise. They’re tasty, huge, sweet, easy to peel and — this is critical — they look GREAT in photos, a social media must. This kind of trending doesn’t lie.

Sumo tangerines are back in season for a limited time. These fruits are a cross between an orange and mandarin and are easy to peel, low in acid content and have a perfumy citrus flavor. Normally at Whole Foods they can run $3.99 a pound. Right now smith's grocery is selling them for 99 cents each which works out to about $1.50 a pound if you select the largest and heaviest size fruit like I did. I normally only eat organic cittus fruit but make an exception for the sumo tangerine because they taste amazing. Hopefully soon they will grow them organically. This variety was hybridized in Japan over 40 years ago. You might be able to grow your own, look for a shiranui mandarin tree. #sumocitrus #sumotangerine #sumoorange #sumofruit #dekopon #shiranui #tangerine #freshfruit #fruit #citrus #citrusfruit #eatfruit #fruitarian #rawfoods #rawvegan #nutrientdense #nutritarian #growingyourgreens