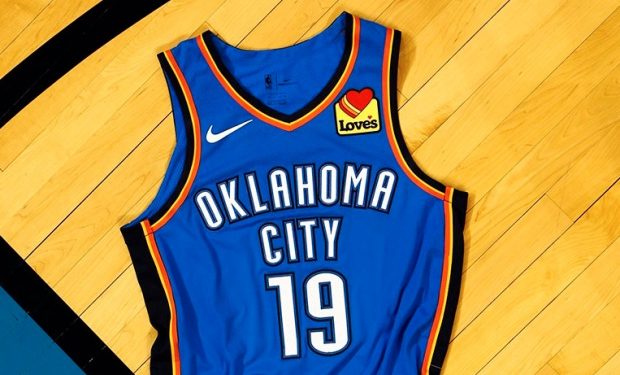 It didn’t take long for the last of the NBA holdouts to sell space on their jerseys to a corporate sponsor. Ever since Rakuten bought time on Steph Curry‘s chest and GE purchased Kyrie Irving’s pecs for sponsorship, NBA watchers have been waiting to see who would win the prime perch on Russell Westbrook’s jersey. The wait is over as the OKC Thunder became the 30th out of 30 NBA teams to add a sponsored patch to their jerseys. The OKC Thunder patch will represent a company called Love’s Travel Stops & Country Stores. That’s a lot to put on a patch! So the patch just reads Love’s with their heart logo. From a distance, which is how these patches are usually glimpsed, the letters can sometimes look like they spell out the perhaps more familiar corporate name Lowe’s, the home supply chain. (Lowe’s is a familiar sports sponsor, having sponsored NASCAR’s Jimmy Johnson in the past.) But Love’s makes much more sense for the Thunder.

Like so much of what the Thunder stand for, the Love’s Travel Stops brand is OKC-based and homegrown. It’s this tight-knit community that apparently appeals so much to superstar Paul George, who looks to call OKC home (with Westbrook) for the foreseeable future. Love, BTW, isn’t just about being an affectionate place to stop and shop either — it gets its name from founder Tom Love. The company has been around since 1964 and employs more than 20,000 people. That’s just the start of a new fan base the Thunder can tap into — Love’s has a presence in 41 states. As it says on the Love’s site: “Love’s Travel Stops & Country Stores is a North American family-owned chain of more than 470 truck stop and convenience stores in 41 states in the United States. The company is privately owned and headquartered in Oklahoma City, Oklahoma.”

We serve our Customers with pure heart, and we’re proud to expand our support for the team that plays the same way! Love’s and @OKCThunder are the perfect hometown fit. #HometownLoves https://t.co/Gl79ifKatu pic.twitter.com/hDCJCWUd8P