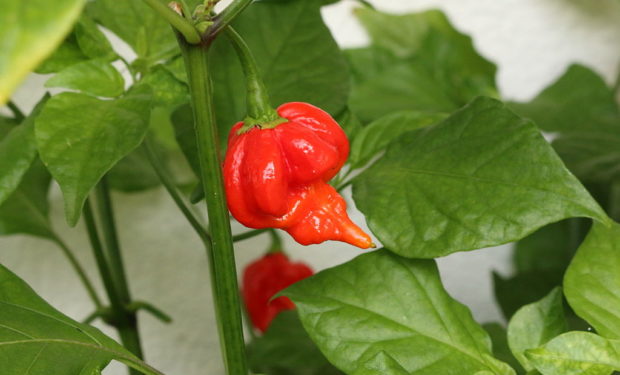 Scorpion pepper -- watch out. (photo by Kouya via Wikimedia Commons)

Tabasco keeps responding to customers who want a more fiery experience — and scorpion peppers are the latest answer. “A tangy sauce with untamed heat and a touch of Caribbean sweetness,” says Tabasco. Others have been known to simply say, “Ouch.” But then “more please.” That’s the way the spicy jones works. The Scoville scale — invented to determine the spiciness of sauces like this so one didn’t have to sacrifice a tongue in the pursuit — rates the new Scorpion Tabasco at 50,000 on Scott Roberts’ Scoville Scale chart site. Regular Tabasco is less than 3,000, according to Tasting Table.

There’s a limited supply available from the Tabasco site while it lasts. (Update: They’re sold out.) Tabasco isn’t the only player in the Scorpion game, of course, but it has the huge name recognition and massive distribution scale. Another alternative, besides the Rogue Moruga Blood Orange Scorpion Pepper Sauce above, is Heartbreaking Dawns 1498 Trinidad Scorpion Hot Sauce, which wins a rare 5-star rating at Scott Roberts. In fact Heartbreaking Dawns other sauces also get some 5-stars ratings there.