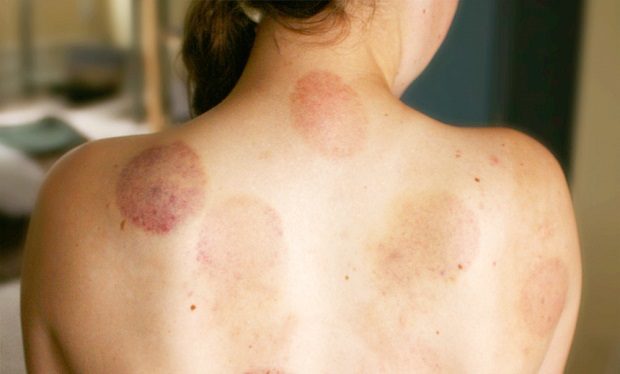 By Amy Selleck from Portland, OR, USA (Bruised Back from CuppingUploaded by SchuminWeb) [CC BY 2.0], via Wikimedia Commons

Notice those surface bruises in perfect circles on the arms and shoulders of Olympic gymnasts like American pummel horse competitor Alex Naddour? That’s from cupping, an ancient technique that proponents say helps blood flow and promotes healing and strength. Cupping dates back at least 3000 years, being found in Chinese, Egyptian and other Middle Eastern cultures. Cupping is often associated with acupressure and acupuncture – sometimes being combined with these in a Traditional Chinese Medicine (TCM) regimen.

[Michael Phelps’ Circle Bruises Also From Cupping, Like US Gymnasts]

Naddour and other athletes practice “dry cupping.” (A “wet cupping” technique also involves controlled bleeding.) Cupping is done with a rubber, glass or silicone suction cup which creates a vacuum drawing blood to the surface of the spot where applied — hence the circular bruise marks. It’s an organic treatment that involves no questionable substances — a concern for Olympians. Hollywood elites like Jennifer Aniston and Gwyneth Paltrow have been cupping advocates. Tennis star Andy Murray has also reportedly tried it. Scientific evidence proving cupping’s medicinal value is not abundant, though some smaller studies have linked cupping with salutary effects on pain management. For athletes like Naddour, even a placebo effect could be enough to get him that 1/10 of a point that often makes the difference.