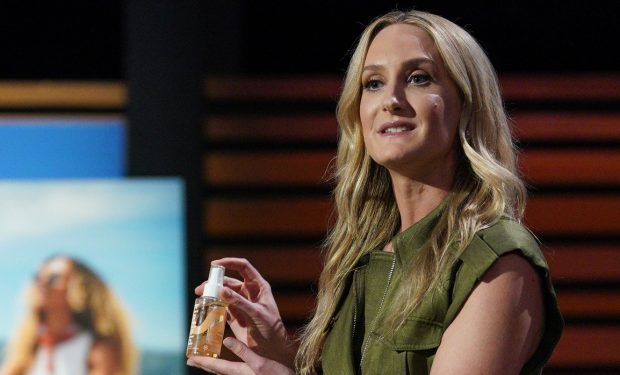 Kinfield products are designed to be used anywhere in the great outdoors — in the mountains or forest, backyard or beach.

Kinfield’s Golden House DEET-free mosquito repellant is made of Indonesian citronella and smells good (hints of citrus and vanilla).

Kinfield’s Anti-Itch Balm is made of cajeput and eucalyptus oils (to relieve the itch), and colloidal oatmeal, turmeric, and arnica to calm inflammation of the skin.

The Kinfield sunscreen (above) is made of 100% mineral non-nano zinc, aloe, glycerin, and sea kelp.

As seen on Shark Tank, Powell knows how to run a successful company. However, she admits on the company blog that she “missed” the original email from a Shark Tank producer asking if she would be interested in auditioning for the show. That was in January 2022. When she stumbled upon the email — seven months later! — she wrote him back.

Long story short, the producer called her back and said, “That is THE LONGEST it has EVER taken ANYONE to respond to my email!!!!!!”

Powell admits: “You could hear the laughter in his voice. And rightly so! I immediately apologized and sheepishly explained how it had all happened, and said that I’d still love to be considered, if there was anything at all that we could do.”