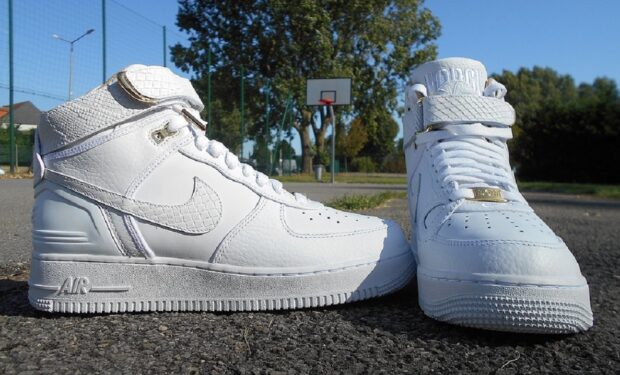 The Nike Air Force 1 is the keynote of the Nike brand as goes its powerful basketball DNA. A casual shoe that was once a basketball shoe, the Air Force 1 smacks of NBA legends like Charles Barkley and Moses Malone for OGs, while the youth is knowing this as pure streetwear. (Later OGs, off the court, took the stage in AF1’s, as Jay Z and Fat Joe footage can attest.)

There are now reportedly more than 2,000 versions of the Nike Air Force 1.

Below is a quintessential example of the Air Force 1’s continued versatility, as Nike gives it an understated autumnal flair with subtle olive tones. Or as Sneaker News describes the shoe: “Nike applies some seasonal olive tones to this Air Force 1 with tumbled leather. These are a must for the new season!”

It’s the tumbled leather that’s drawing the lion’s share of commentary. One responder said, “Nike should make all AF1 with tumbled leather” while another wrote, “Tumbled leather the only leather I rock with.” Yet another doubts it’s really tumbled, and thinks it might be a tumbled print.

What is tumbled leather anyway? Boutique Massachusetts leather studio Frank Clegg Leatherworks describes their tumbled leather process like this: “(Tumbled) leather is gently tumbled in rotating drums filled with vegetable extracts to give it a distinctively soft and relaxed hand, while at the same time remaining durable.”

SneakerFreaker describes the tumbled leather as “generally top grain leather that has been spun in a machine with a bunch of small stones. This process loosens the fibres, brings out the leather’s natural grain and gives it a soft, semi-sheen surface.” Tumbled leather is also sometimes called nappa leather.

The most popular Air Force 1 remains the all white, as seen in the pic here from Amazon: