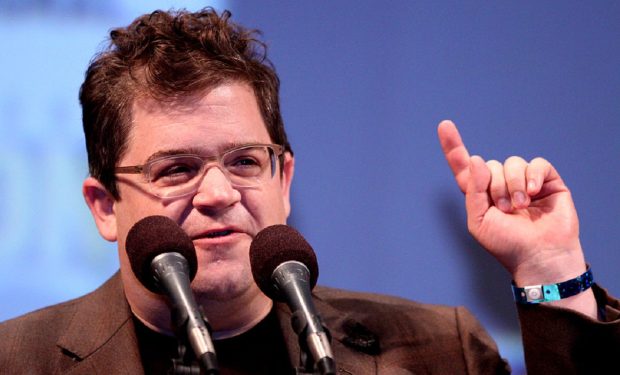 Comedian, actor, writer and producer Patton Oswalt is rarely speechless, but this creative, inventive design solution for watching movies at home knocked the articulate Oswalt down to a three letter response. Of course, it was appropriate — and he did use ALL CAPS.

“WOW,” wrote Oswalt, after watching and sharing this TikTok star’s home movie projector innovation. Even better than the cool design thinking — not always rare, but usually expensive — is that the woman’s tiny apartment not only swiftly transforms into a bona fide mini movie theater, but that the effect is achieved on the relative cheap.

The projector and screen setup costs just $360 together, she says, at Amazon. (See link below.)

Another advantage of this technique is that the softer light from projection screen delivers less strain on the eyes than the typical flat screen LED, which is awash in blue light. With Americans estimated to be consuming nearly 10 hours a day of screen time — between phones, computers and TVs — every little bit of relief for the eyes can be a healthy boost.

According to ViewSonic, an organization dedicated to “accelerating the digital transformation in education,” the blue light mitigation provided by projector screens is valuable. ViewSonic writes:

“Projectors do produce blue light but since you will not be staring straight at the light source while viewing this light does not hit your eye directly. The light bounces off another surface (a projector screen or wall) before hitting your eyes; this surface absorbs some of those damaging wavelengths, reducing the amount of blue light that actually reaches your eyes.”

No telling if Patton Oswalt likes this genius use of space, the expertise of the presentation, the purple Alexa-made light — or if he’s just tired of rubbing his eyes. Lots of other viewers also said “wow.”

It’ll be interesting to see whether the projector screen, for sale here, will see more sales, reviews and comments after this video shout out. TikTok is said to be the biggest game in Influencer Town these days — does it work?