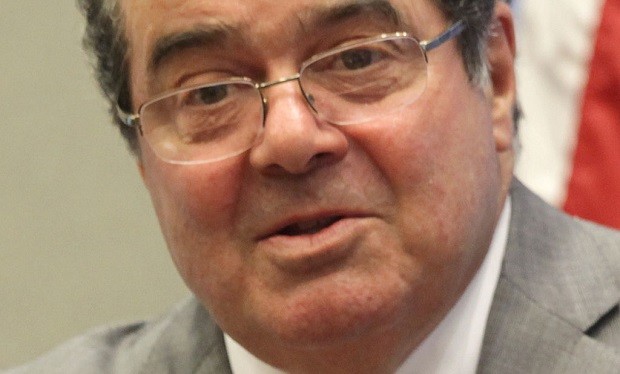 After Supreme Court Justice Antonin Scalia died last weekend, among the obituaries by aggrieved conservatives I found one that seemed particularly mad, by John Zmirak of The Stream. Not content with the Republican plan to block any replacement appointment to SCOTUS by President Obama, Zmirak called for GOP Senators to “Honor Justice Scalia by Keeping His Court Seat Empty — for Years, If Necessary.” But the maddest part to me was Zmirak’s closing: “In the meantime, of Justice Scalia, I feel sure that he is enjoying his reward, and I hope that the Catholic Church recognizes him soon. As they said of John Paul II, santo subito! Antonin Scalia, pray for us.”

Now that I think of it, though, Zmirak’s hope for Scalia’s canonization is less crazy that the Republican stonewall — in fact, maybe not crazy at all. When I was a Catholic boy in working-class Bridgeport, Connecticut, John F. Kennedy was after his martyrdom regarded by the local faithful as something like sanctified; I recall portraits of Kennedy on Catholic living room walls, alongside those of haloed saints — there was even a popular print of Kennedy walking with the late Pope John XXIII, and none of it seemed blasphemous or out of place. But think of the prominent Catholic American political figures in the years since. They are typically Democrats, like Kennedy, but whereas Kennedy never had to confront Roe v. Wade, Joe Biden and Nancy Pelosi are, in keeping with the politics of their party and time, pro-choice; it is hard to imagine sentimental Catholic-Americans quite taking them unto their bosom. Scalia, on the other hand, was as traditional a Jesuit-educated Catholic as your Marian grandma could ask for, not only anti-abortion but the father of nine children (“Being a devout Catholic means you have children when God gives them to you,” he said). As Catholicism declines in America, it may be that its surviving, literally die-hard followers of the One True Church, being short of alternatives, will come to venerate Scalia. And if the Church decides the throw them some ossa, wouldn’t Nino be a perfect choice?