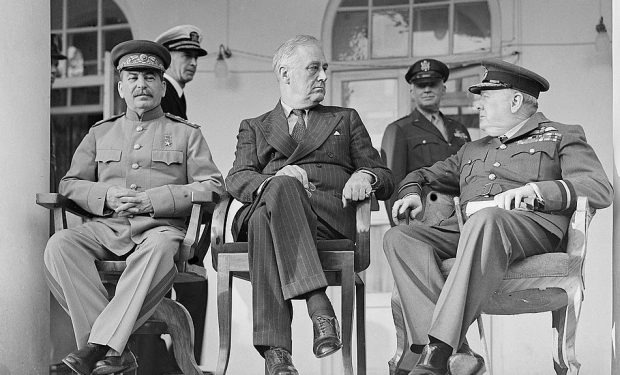 “Here in the United States, we are alarmed by new calls to adopt socialism in our country. Tonight, we resolve that America will never be a socialist country.” With those words in his State of the Union address, Donald Trump dusted off a Republican playbook that’s as least as old as the single wing formation but now looks as if it will form the roadmap for his 2020 re-election campaign.

As a child of the Cold War era, I recall my indoctrination about the contrast between freedom-loving America and the godless communism of the former Soviet Union. When I wasn’t huddled under my desk, contemplating the prospect of a nuclear holocaust that would erase me and everyone I loved from the planet, I listened dutifully as my teachers painted a portrait of Soviet life so unremittingly grim it convinced me that, unlike the green grass and blue sky I might see when I looked out the classroom window on a balmy spring afternoon, my counterparts in Moscow lived in a black and white world of perpetual snow, one where the thermometer never rose above 20 degrees. For decades, too, Republicans and their allies in the medical profession fought the “socialized medicine” of the program we now know as Medicare, something that’s about as un-American as Russian dressing.

But tens of millions of Americans born in the decade before the fall of the Berlin Wall and just after, and with a letter near the bottom of the alphabet attached to their generation, have no vestigial memory of the time when “socialism” and “totalitarianism” were as closely tied as Josef Stalin and his mustache. For all their youthful idealism, they’re surprisingly pragmatic, more concerned about whether a program solves a problem, than they are about what it’s called. Even Americans of my vintage, if asked whether they’d like to scrap Medicare or other social welfare programs, will respond with overwhelming majorities in favor of keeping them.

[Rewriting the Rules of the American Economy: An Agenda for Growth and Shared Prosperity]

They recognize, as Nobel laureate Joseph Stiglitz (see image above) has put it, in our version of capitalism too often American corporations benefit from a system in which we “socialize losses and privatize gains.” Nothing would be better for this country than a spirited debate about whether Medicare for all, free college tuition or raising marginal tax rates on the wealthiest Americans are wise and fiscally sound public policy. And nothing would be worse than succumbing to the easy temptation of squelching that debate with a pejorative label. Donald Trump and his strategists may hope that exhuming the corpse of socialism from the cemetery and rattling its bones will win him four more years in the White House. He might be surprised.