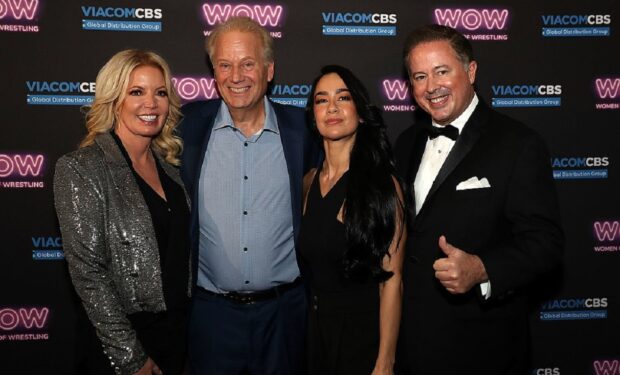 CEO and controlling owner of the Los Angeles Lakers of the NBA Jeanie Buss is bringing her WOW — Women of Wrestling — to CBS Paramount, giving the All-Female wrestling franchise a big new life.

A post shared by WOW- Women Of Wrestling (@wowsuperheroes)

In a wide-ranging and insightful interview with The Hollywood Reporter, Buss says the WOW deal is a one-of-a-kind opportunity with CBS Paramount providing a platform that is “larger than anything that women’s wrestling has ever had in the past.”

It’s a vision and value acknowledgment, as Buss describes it — and CBS Paramount understands both. “Having CBS Paramount as our partner,” Buss says “they see the value in women’s sports, they are willing to become partners in what our vision is.”

Maybe it’s just a good idea generally to trust the vision of Jeannie Buss, and CBS Paramount recognizes this as good practice. After all, Buss has demonstrated repeatedly that she knows where nitty gritty business and bright lights glamour meet. (Buss has been around the Lakers success story since the Showtime era of Magic Johnson and Kareem Abdul-Jabbar through the Kobe Bryant-Shaquille O’Neal years and now the LeBron James edition of the purple and gold.)

A post shared by WOW- Women Of Wrestling (@wowsuperheroes)

Buss knows what works, what sells, and what inspires. Now maybe all WOW needs is to get Buss even more involved. “I’m a fan of WOW, but it’s not my day job,” Buss confesses. The Lakers are her very time-consuming day job, and WOW is an investment. But an investment she is passionate about.

Asked about how women’s sports will grow, Buss has an answer that seems indisputable: “They need people like me who are willing to invest their personal funds and their passion into creating opportunities for women.”