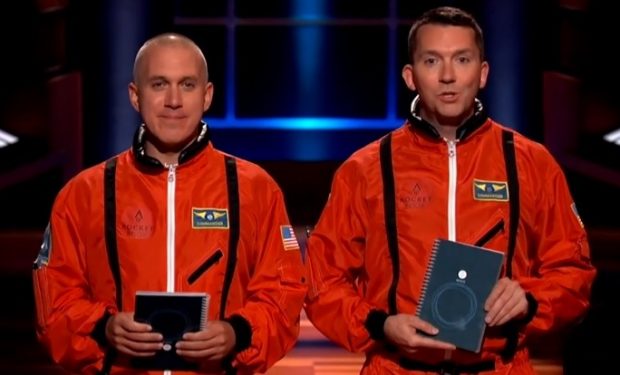 Rocketbook is a reusable smart notebook that can save notes and drawings (scanned to the cloud via the Rocketbook app) and can be erased when put in a microwave. The founders of Rocketbook, Jake Epstein and Joe LeMay, donned astronaut suits and pitched their company on Shark Tank in May 2017.

They went into the Tank seeking an investment of $400,000 in exchange for 10 percent equity. When they revealed that they sold 75,000 Rocketbook notebooks, tech guru Mark Cuban laughed “Did you really?!” and Kevin O’Leary told them they couldn’t make money with the product. Alas, Rocketbook did not land a deal on the show but after being “laughed off Shark Tank,” the Rocketbook Wave Smart Notebook became the #1 selling notebook on Amazon.

[The Rocketbook is still just $27 at Amazon]

After the Shark Tank episode aired, Rocketbook crowdfunded another smart notebook for the office, The Everlast Notebook. Rocketbook raised $2,525,794 for Everlast, making it “the most crowdfunded office product ever.” They have since sold more than 500,000 Rocketbook notebooks (more than $10 million) in giant retail stores including Best Buy, Office Depot, Staples and Target. New episodes of Shark Tank air Sunday nights on ABC. [27 Favorite ‘Shark Tank’ Products at Amazon — New List]