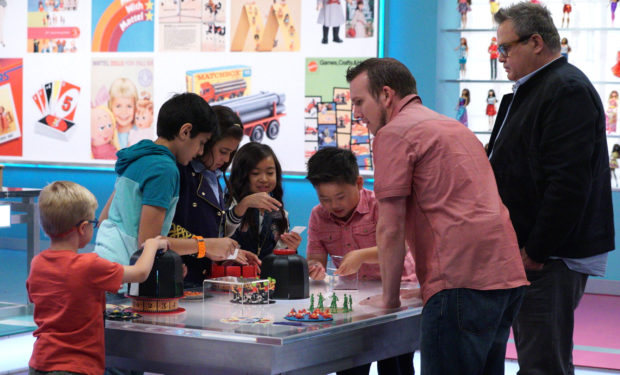 Les Cookson of Lincoln, California is the inventor of The Animation Dome, one of the most original toy inventions presented on The Toy Box yet. The Animation Dome is inspired by the classic zoetrope, an optical toy that moves like a carousel. When spun, the cylinder inside that holds a series of pictures gives the impression of continuous motion. Cookson’s Animation Dome creates 2D and 3D animations from drawings, claymations and toys (LEGOS, toy soldiers, you name it). Cookson is presenting The Animation Dome on The Toy Box on Sunday, November 12.

[Mattel made Artsplash, winner of The Toy Box, Season 1]

Les knows that kids like The Animation Dome. He’s not just an inventor — he’s also the father of six kids! He just needs $60,000 to manufacture the toy. On the Animation Dome Kickstarter page, if a backer pledges $39 or more, he/she gets a complete Animation Dome including 12 sets of cartoons, unlimited printable templates and coloring pages. But only if Les hits his $60,000 mark! The Toy Box airs Sundays at 7pm on ABC, right before America’s Funniest Home Videos.