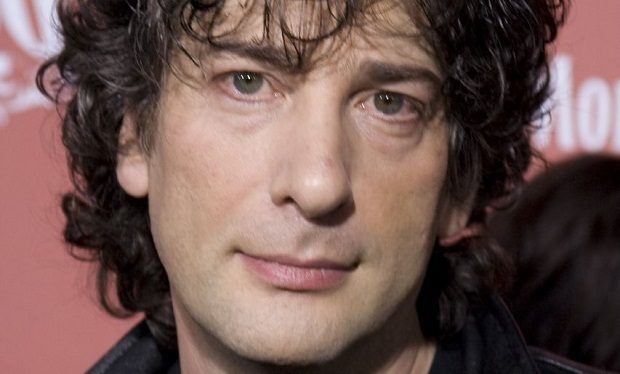 Neil Gaiman in 2007 (photo by pinguino k via Wikimedia Commons)

The unfettered imagination of Neil Gaiman slams into ancient Norse myth in his hot new release Norse Gods, and the result is lightning, thunder and thrilling Gaimanesque poetry. “Who else but Neil Gaiman,” asks Maria Tatar, of Harvard’s Folklore and Mythology Department, “could become an accomplice of the gods, using the sorcery of words to make their stories new?” Subjects and authors rarely make as perfect a match as this.

[LEFT: Norse Gods by Neil Gaiman — who else could make this a bestseller?]

Currently lodged at #4 on the Amazon Bestseller list, Norse Gods is an unlikely bestseller — but for Gaiman’s fame and style. Gaiman’s long line of best sellers from Sandman to American Gods guarantees him an invitation to the party. But the fact that Gaiman — with the help of Loki, Thor and Odin — proceeds to be the life of said party is a trick he must pull off every time. Here the author does it again. A dark, spooky, intelligent, scary, just, jammed symphony of a book, Norse Gods is the work of what one reviewer calls “a truly a fantastic storyteller.”