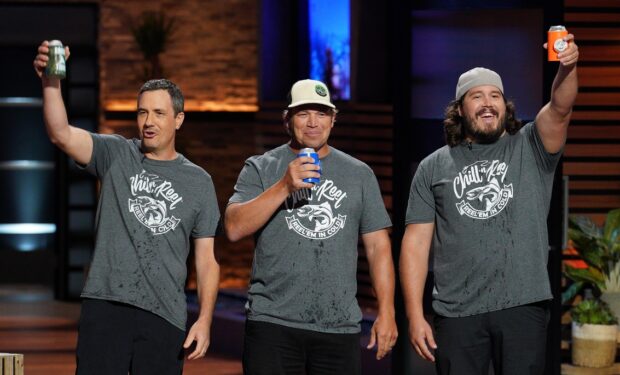 On Season 13 of Shark Tank, three entrepreneurs from Sand Springs, Oklahoma, Chris Diede, Jake Rutledge and Chase Terrell, “hope to reel in a Shark with their fun solution to drinking a beverage while fishing.”

Their product, Chill-N-Reel, is a can cooler with a hand line fishing reel attached.

Chill-N-Reel comes pre-wound with 50 feet of fishing line (8 lb. test) and includes a polyurethane foam coolie insert sleeve (which is designed to hold standard 12 ounce cans and bottles), fish hook, and one sinker.

The three Okies have the good fortune of pitching in front of billionaire Mark Cuban who’s invested in fish and fishing products including World Record Striper Co, Shell Bobbers (now Fishing Ammo), and Reely Hooked Fish Co., among others.

And then there’s the video above, posted by fellow Shark Kevin “Mr. Wonderful” O’Leary who caught Cuban in a Chill-N-Reel t-shirt on the lot of Shark Tank. After having his temperature read, Cuban sings “I’m Looking Over a Four Leaf Cover.”