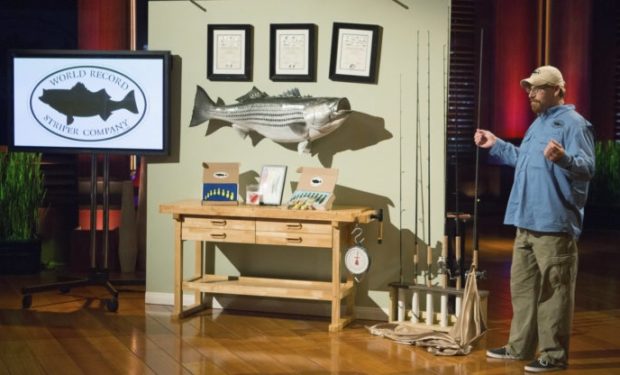 World Record Striper Company is known for its original RattleSinker. It’s a piece of fishing tackle that acts like a fish call – it mimics the noise of prey shellfish – to attract big fish to your bait. The RattleSinker technology was developed by Greg Myerson, 4x World Record holder for catching stripers (his record is 81.88 lbs.). Note: while chartreuse is the signature color of the RattleSinker, the company suggests using the camo green to catch bluefish. Myerson of North Branford, Connecticut pitched World Record Striper Company on Shark Tank in May 2015. He went into the Tank seeking an investment of $75,000 in exchange for 20 percent equity. He got billionaire Mark Cuban to invest $80,000 for 33 percent.

Since Shark Tank, World Record Striper Company continues to make new products including the Radfish Rattle Craw Lure for fresh water Bass. Myerson also posts lots of fishing tip videos on social media. His latest videos show him fishing with his RattleSinker with a live eel, see below. Myerson recently added author to his resume. Check out his memoir Born to Fish, which tells stories about being the son of a mobster, among other things — see link above.