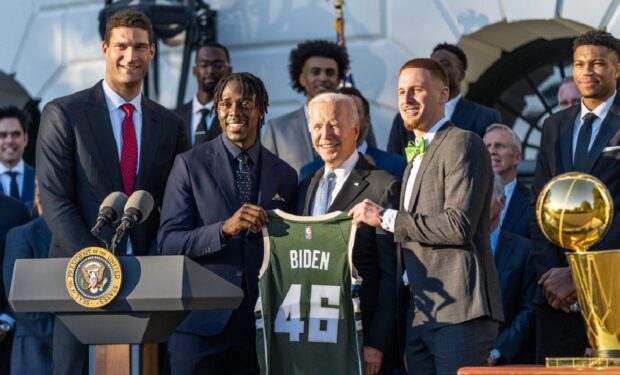 It’s a bird, it’s a plane, it’s Jrueperman. Milwaukee Bucks point guard Jrue Holiday once again showed his superhero playoff instincts, zooming in from stealth positions to save the day for the defending NBA champions against the Boston Celtics.

And while superstar Giannis Antetokounmpo is usually the hero for Milwaukee — all while clearly looking the most like a Marvel Universe invention — Holiday has earned the nickname Jrueperman.

Twice in late game situations in Game 5, Holiday executed stifling defensive measures against Boston’s recently named NBA Defensive Player of the Year Marcus Smart. First (above) Holiday helped back along the baseline to get a block and possession-save against Smart, who had beaten his man, Pat Connaughton, and was heading toward the hoop. That Connaughton hug for Jrueperman says it all.

Then Holiday made sure the Bucks accomplishment wasn’t upended, stealing the ball from Smart just before time expired. “So clutch,” writes one fan. Marcus Smart would probably even (reluctantly) agree.