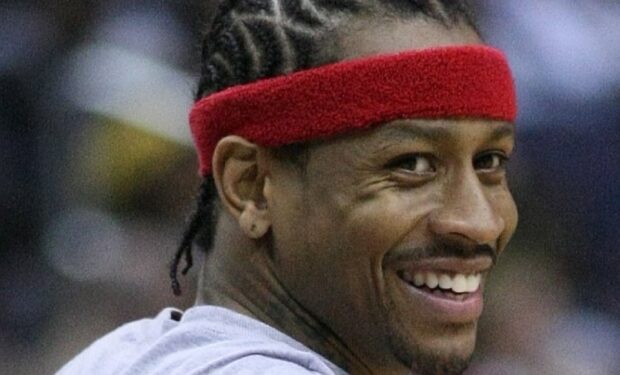 NBA superstar Kevin Durant has a way with words and NBA legend Allen Iverson wants everybody to know it, especially when those words are all about the respect KD has for those who came before him and inspired him. Like, um, the great Allen Iverson! Iverson shared the video below where Durant says, “Iverson, he was like the pantheon for me, you know? Once of those guys I emulated every time I went outside and played with my friends.”

You can’t praise someone with any more respect than that. And AI obviously feels KD’s love; he shared the video with his followers. Durant passed Iverson on the all-time points list, which made KD wistful about what he’s been able to accomplish and how much he admires those whose games helped make his what it is. Durant says everybody on his youth team was trying to cross people up like AI, and you can still see KD doing it nightly in a Brooklyn uniform.

Both giants of the game — one tiny and one huge — were part of the NBA 75th Anniversary team. Upon his selection Iverson repeated what Durant felt just watching him play: “To the boys and girls from around my way, anything is possible. NO EXCUSES!!!”

Durant is generous in praising many of the NBA legends before him, not just AI. KD will probably pass the late, great Kobe Bryant (below) on plenty of NBA records lists, too. KD is a once-a-generation type player. And he knows enough about the work ethic required to often shout out the generation that made his journey possible. Durant remains a player to root for — he plays every minute to win.