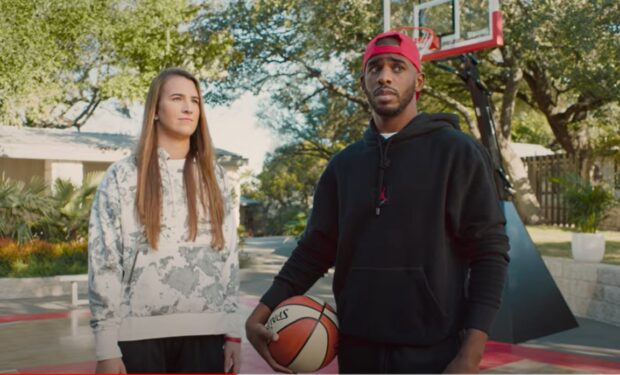 NBA basketball star Chris Paul (currently with the Phoenix Suns) is featured in several State Farm insurance commercials with “agent Jake” who continually tries to assure a skeptical Chris Paul that things will be “exceptionally great.” In the most recent commercial, Chris shares the court/screen with female basketball pro Sabrina Ionescu.

The 23-year-old point guard played college basketball for the Oregon Ducks for four years before she was selected by the New York Liberty in the 2020 WNBA Draft (she was the first overall pick). Sabrina, who was named 2020 Naismith Player of the Year and AP Player of the Year, is the only NCAA Division I basketball player (male or female) to record 2,000 points, 1,000 assists, and 1,000 rebounds in a career (in other words, she is the NCAA all-time leader in career triple-doubles).

Prior to the WNBA Draft, Sabrina became close to the late NBA legend Kobe Bryant, who gave her one-on-one training. “He taught me his step back,” Sabrina says. Sabrina worked out with his daughter Gigi and went to L.A. to help him coach Gigi’s team.

Sabrina spoke at the Bryant memorial service in February 2020 (see video above). Hours after the service, Sabrina made the aforementioned triple-double history and said “that one was for him.”

In May 2021, Sabrina became the youngest player in WNBA history to record a triple double (she hit 26 points, 12 assists, and 10 rebounds), which was also the Liberty’s first triple-double in its franchise history.