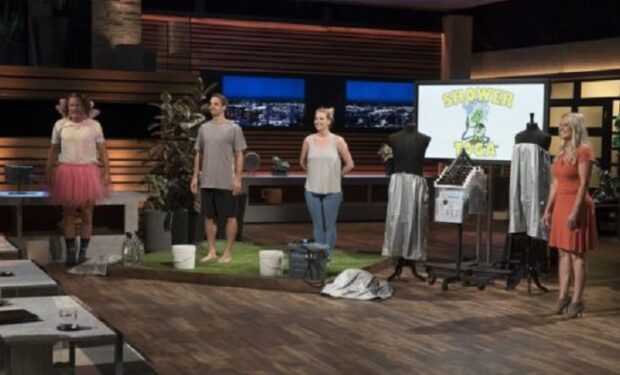 Shower Toga is a “shower curtain for your body” designed for awkward moments when you want/need to rinse off in public (camping, music festivals, surfing, hiking, biking, running, etc.). The entrepreneur behind Shower Toga, Kressa Peterson, came up with the idea after participating in a muddy Spartan Run.

The product, which is made of water wicking nylon fabric, goes around the waist (for men) and/or around the armpits (for women). It includes drawstrings and pockets to hold soap and shampoo.

Kressa pitched the Shower Toga on Season 10 of Shark Tank in March 2019. She went into the Tank seeking an investment of $80,000 in exchange for 33 percent equity.

She left with a deal with Mark Cuban (who wants Kress to change the name of Shower Toga) and guest Shark Alli Webb, founder of DryBar — $80k for 40 percent.

After the Shark Tank episode aired, Kressa said: “Mark Cuban and I both had hundreds of messages after Shark Tank aired from college students in the LGBTQ community who reached out to say that Shower Toga was something they were going to use in the gym locker rooms. It just made me feel good to know that I came up with something that was actually helpful and made people feel good.”

Kressa also reports that she’s working on a Shower Toga for disaster relief that would be “more biodegradable.”