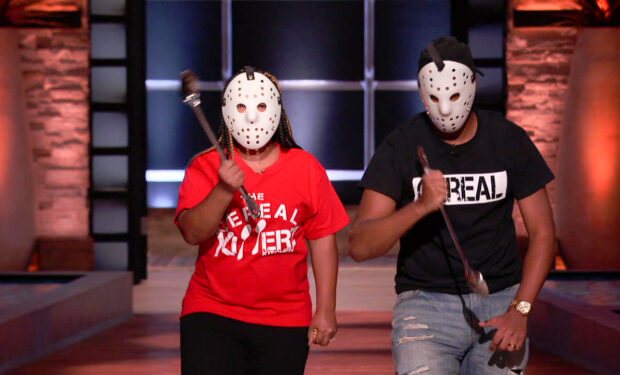 On Season 12 of Shark Tank, husband and wife Chris Burns and Jessica Burns from Las Vegas, Nevada, share their killer idea for a retail franchise that serves a variety of cereal-centric treats, The Cereal Killerz Kitchen.

They’re seeking an investment of $125,000 in exchange of 10 percent equity in “the first and only cereal bar in Las Vegas.”

We hope #centennial is ready for our #SuperBowl #Challenge because it’s here 130+ cereals 1 Bowl 1 Gallon if Milk 45 minutes (40 for competitive eaters) If you complete the challenge by eating it all by your self in the allotted time 1. your $30 will be refunded 2. You will get a Free Tee Shirt 3. Your picture will be placed on the wall #doyouhavewhatittakes all we need is at least one days notice to prepare the bowl. You can DM us or email [email protected] to make a reservation #cerealkillerz 🎥 cred: @thelasvegasfoodie . 📍Centennial 7540 Oso Blanca Rd Las Vegas NV 89149 (10-9) 📍 Henderson (galleria Mall) open till 7 #lasvegas #henderson #centennial #vegaslocals #igfood #igeats #icecream #trending #dessert #foodporn #love #thrillist #explorepage #trending #foodpics #cereal #instagood #dessertporn #breakfast #icedcoffee #lasvegasstrip #insiderfood #insiderdessert #eats #coffee

A post shared by Cereal Killerz Kitchen (@thecerealkillerzkitchen) on Sep 11, 2020 at 9:35am PDT

Don’t count out Lori Greiner: she likes the food retail space, too. She invested $500,000 in OatMeals, a build-your-own oatmeal bar launched in Manhattan.

According to the Cereal Killerz Kitchen website, their opening their second location on The Strip! Their current location is in the neighborhood of Centennial Hills.

#henderson Location update Good morning cereal lovers, With the success of our Centennial location and a new location opening in the next 2-3 weeks (will announce location soon) we have decided to close the Galleria Mall Food court location. But don’t worry Henderson, construction will be completed in March – April for a brand new from the ground up location that will be easily accessible for the community. On another note , we are launching a new online store in the next coming weeks so stay tuned We apologize if this causes any inconvenience or disrupts any upcoming plans for anyone. Hopefully you can make it out to centennial for the time being #cerealkillerz

A post shared by Cereal Killerz Kitchen (@thecerealkillerzkitchen) on Oct 22, 2020 at 8:58am PDT

The Cereal Killerz Kitchen pitch might remind Shark Tank fans of Cow Wow Cereal Milk (see link above). The drink that tastes like “the leftover milk at the bottom of the cereal bowl” was pitched on Shark Tank in 2014 but didn’t get a deal.