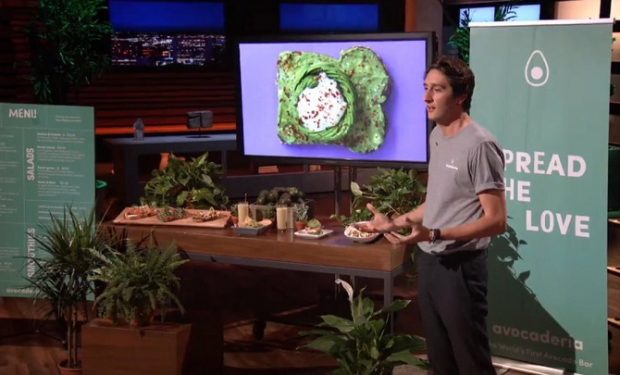 Avocaderia is an avocado bar that opened in Brooklyn in 2017. Everything they serve is made with Avocados From Mexico. From avocado toast to avocado burgers and smoothies — every item on the menu is around $11. One of the co-founders of Avocaderia, Italian-born Alessandro Biggi, pitched the health food business on Shark Tank in February 2018. He went into the Tank seeking a $300,000 investment in exchange for 10 percent of Avocaderia. He accepted a joint offer from billionaire Mark Cuban and NYC real estate maven Barbara Corcoran: $400,000 for 20 percent equity (10 percent each).

Since Shark Tank, Avocaderia has celebrated its first year anniversary in Brooklyn (36th Street in the Industry City neighborhood) and opened its second shop in Chelsea (Terminal Stores on 11th Avenue). In May 2018, Avocaderia announced that it plans to open 20 restaurants across the United States in the next four years. Los Angeles and San Diego are next.

Season 10 of Shark Tank premieres on Sunday, October 7 at 10pm on ABC. Guest sharks to include NBA legend Charles Barkley, Matt Higgins, CEO of RSE Ventures (owner of Relevant Sports) and, for the first time, a former Shark Tank entrepreneur. (Jamie Siminoff didn’t get a deal on Shark Tank for his video doorbell Ring but he sold it to Amazon earlier this year for over $1 Billion.) [Related: 27 Favorite ‘Shark Tank’ Products at Amazon — New List]