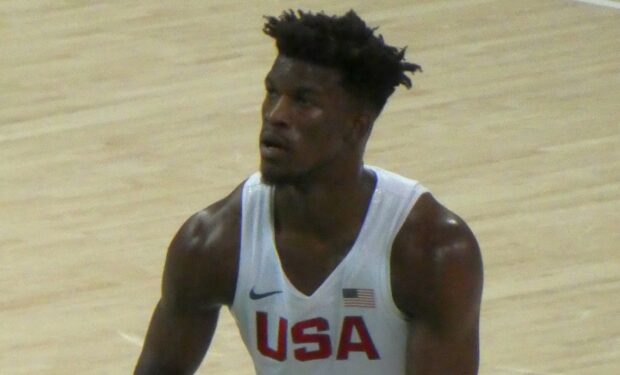 NBA star Jimmy Butler stars in a new Michelob Ultra commercial. The 30-second spot celebrates the return of NBA basketball on TV (without live audiences). The camera follows Jimmy in his gorgeous mansion, packing a bag for his stay in the NBA bubble in Florida.

There aren’t any bikini-clad models hanging out by the pool, or adorable dogs to distract the viewer: it’s just Jimmy, happily singing along to the Hall & Oates pop song “You Make My Dreams Come True.” The song was released in 1981, almost a decade before Jimmy was born!

When Jimmy shared the commercial on Instagram (see above), fellow NBA star Carmelo Anthony (Portland Trailblazers) replied: “Yo, you have to chill bro” with a number of laughing emojis, and the Miami Heat account claimed Jimmy is the “best singer in the bubble.”

Some fans are referring to the pop song as country music (that might have something to do with Jimmy — who’s from Texas — packing a pair of cowboy boots for his stay in the NBA bubble). So much so that the video caught the attention of country singer and American Idol judge Luke Bryan who wrote: “This is magic.”

The 30-year-old NBA shooting guard/small forward played college basketball at Marquette before he was drafted by the Chicago Bulls in the 2011 NBA Draft. After six seasons in Chicago, Jimmy played two seasons with the Minnesota Timberwolves, and one with the Philadelphia 76ers, before he signed with the Miami Heat in July 2019.