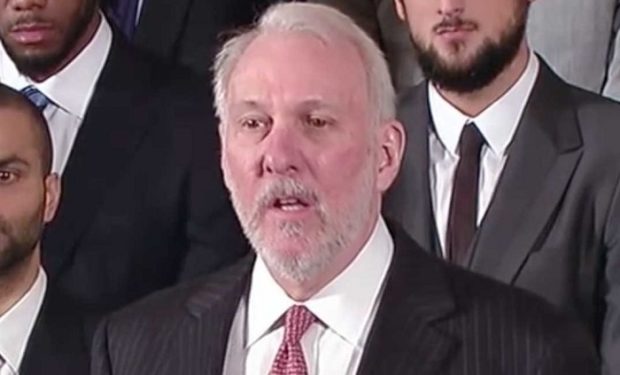 NBA coaching legend Gregg Popovich has been quoted here at lengthy before. But Pop — surefire Hall of Fame lock as soon as he stops drawing up the Xs and Os for the San Antonio Spurs — continues to speak out and meet the moment.

And the USA has never had a moment quite like this one when it comes to race.

Coach Popovich spoke with Maureen Dowd and his quotes pretty much “pop” off the screen/page. He rips the NFL owners who contributed big bucks to Donald Trump while disclaiming racism, he rips Trump treatment of the military (Pop graduated from the Air Force Academy), and he rips NFL commissioner Roger Goodell. For starters.

But Popovich is still learning how bad it is, and that’s his main point. Of the racism that’s endemic to American society, Pop tells Dowd: “It’s even deeper than you thought, and that’s what really made me start to think: You’re a privileged son of a bitch and you still don’t get it as much as you think you do.”

What’s it like to coach, as Popovich says, “if you’re a white coach and you’re coaching a group that’s largely black”?

The interview is well worth the read. Popovich is in a unique position and has a lot to say.