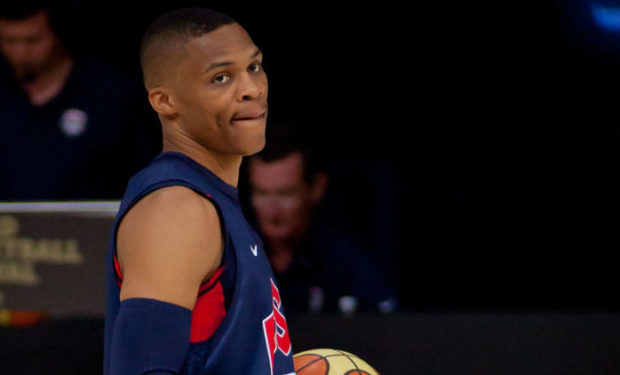 Russell Westbrook for the United States; Jordan Clarkson got next, photo: Tim Shelby from Arlington, VA, US (IMG_8037Uploaded by Dudek1337) [CC BY 2.0], via Wikimedia Commons

NBA Utah Jazz star Jordan Clarkson was everywhere, slashing to the basket in ways so swift and strong they brought to mind that inimitable talent on the other team, former NBA MVP Russell Westbrook. The Jazz ultimately beat the Rockets with a buzzer beater, but the show was Clarkson’s — and Westbrook’s.

Westbrook was having a night, as they say, going for 39. But nobody played better than Clarkson who scored 30 points in 29 minutes and put on a clinic in how to get to the basket. (He seemed to be mimicking Russ, as if they were playing HORSE.)

Clarkson is now nightly sending a message to the NBA that maybe he is part of the best backcourt in the league. Maybe it’s not James Harden and Westbrook or the Lillard-led duo in Portland — maybe it’s Jordan Clarkson and Donovan Mitchell. Put the Jazz’s Mike Conley in there and there’s your answer for best 3-guard backcourt in NBA.

Watch the similarities between Westbrook’s drives below and Clarkson’s.